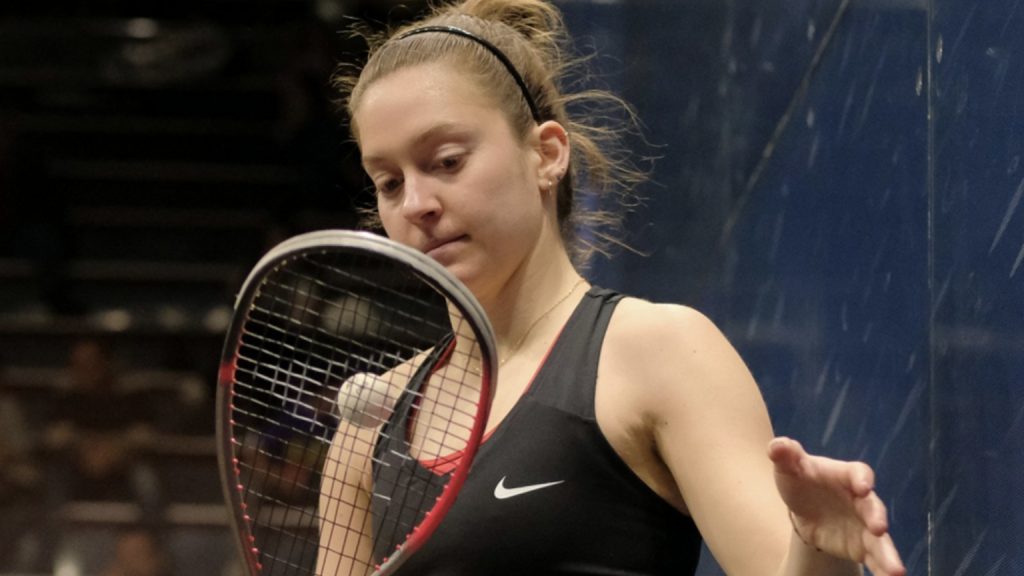 PLAYER OF THE MONTH

In the first part of a series taking a look at some players performing well on the Challenger Tour, MATT COLES spoke to Sabrina Sobhy about her progress over the last 12 months.

At the start of 2018, Sabrina Sobhy sat outside the top 200 in the World Rankings, but she recently broke into the top 30 for the first time in her career.

This is not her first appearance inside the top 50, though, with the American having sat inside that mark on the World Rankings back in 2015, before she went to college, where she admits she was not bothered about her ranking, and that she was just happy to get back on the Tour after graduating.

“It wasn’t until the summer of 2018 that I decided to play on the tour professionally. I didn’t really care want my ranking was before that and quite frankly, I enjoyed starting out from a lower ranking, as it was a good measure of my progress throughout my first-year full time,” she admitted.

“This jump in ranking can only be attributed to committing to squash full time and letting the hard work be put to the many challenges faced on tour.”

The aforementioned rise in her ranking has come through some great performances on the PSA Challenger Tour, where the young American had a run of winning three tournaments in three weeks.

She won the London Open at a canter as the No.6 seed, dropping just a single game throughout the tournament. She overcame No.4 seed Rachael Chadwick, No.2 seed Menna Nasser and top seed Jasmine Hutton to take the title.

Sobhy went on to win the Monte Carlo Classic a couple of weeks later, coming through as the No.4 seed, before then winning in Pakistan just six days later. The 23-year-old won the Serena Huawei Pakistan International Squash Tournament without dropping a game.

“These back to back wins were definitely a highlight of my first year. They helped me build confidence in going into the more elite tournaments,” the American said.

“That was definitely my best squash at the time, however, I do think I’ve improved since then and I am aware that there is always more improvement to be done.”

That victory in Monte Carlo was the biggest of her career, and she did so by downing the top two seeds en route to the title.

The young American had beaten Kace Bartley and Donna Lobban in the early rounds. She then took out No.2 seed Zeina Mickawy in the last four, before beating then-World No.16 Yathreb Adel in the final in straight games. The location of the event was one of the reasons Sobhy believes she was able to play at her best.

“Monte Carlo was truly one of the most beautiful destinations I’ve had the pleasure of competing in. Everywhere you walked was aesthetically pleasing; I think I just found myself really relaxed as a result of these views,” Sobhy explained.

“The tournament itself was spectacular. The hotel was a two-minute walk from the courts and all the players were given a room overlooking the pier. The hotel directors and sponsors really made you feel comfortable and welcomed.

“I didn’t anticipate getting to the finals and ended up having to push my flight back an extra day – not a bad place to spend an extra day. Needless to say, it was such a pleasure to be the Monte Carlo 2019 Champion, an achievement I’ll always remember.”

Her performances on the Challenger Tour saw her named as the Tour’s Player of the Month twice, an accolade she admits she had not thought about too much.

“It was definitely cool to be chosen twice for Player of the Month. To be honest, I hadn’t put too much thought into it. It’s certainly nice to feel additional rewards and praises outside the court but the only results that really matter are the ones inside,” she explained.

From the Challenger Tour to the PSA World Tour, and Sobhy has started to become a force to be reckoned with at the major events.

She made it through to the last 16 of the J.P. Morgan Tournament of Champions on home soil in New York after beating higher ranked players, in Hong Kong’s Joey Chan and England’s No.15 seed Victoria Lust.

“New York was an absolute blast. I was able to have more support in those matches than I even imagined,” she said.

“Normally, I despise close friends and family watching, however, I think I’ve finally grown out of that nervousness and angst and can see their support as nothing other than love. I think the TOC was my most rewarding event thus far – it gave me a feel for the pleasures of being more renowned on tour.”

This could be in part down to the fact the 23-year-old has left the United States, making the move to live in Cairo on a full-time basis.

Sobhy believes that the move has really helped her to improve her squash game, but it has also had an influence with how she is off the court as well.

“Of course, moving to Cairo has helped. I was certain it would, otherwise I wouldn’t have moved here. Living here has helped me off the court as well which I find just as important,” she said.

“Coming from an American college, this move has made me alter my lifestyle in order to fit the Egyptian culture and customs. The people here are extremely kindhearted and welcoming; they really do feel each day is a blessing, something that everyone can learn from and live by.”

Sobhy is one of five Americans who currently sit inside the top 50 on the World Rankings. Her older sister Amanda is the World No.8, while Olivia Blatchford Clyne is also inside the top 16, with Olivia Fiechter and Haley Mendez also represent the USA in the top 50.

The 23-year-old believes that this could well be the best selection of American women in squash history, and that the drive they have makes them all drive to be better.

“I think this could be our strongest team yet. We all are so close to each other’s level which makes it great for training and motivation,” Sobhy explained.

“I’d also say our team does a remarkable job at remaining humbled by our teammates, as every member of US Squash is incredibly driven, and passionate. I’ve absolutely found their support to be a main factor for persevering in this career.”

At just 23 years of age, there is no doubt that Sobhy will be a huge part of U.S. Squash for the foreseeable future. Will she surpass the achievements of her older sister, though?