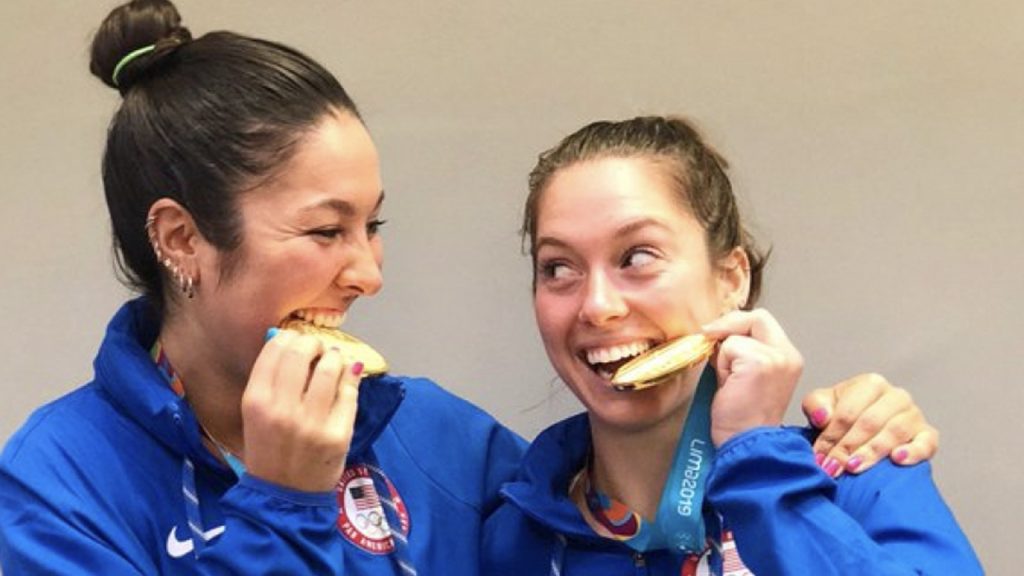 After success in the women’s singles in the XVIII Pan American Games in Peru, USA added two further Squash gold medals to its Lima haul after title triumphs in both the Men’s and Women’s Doubles events.

US women’s No.1 Amanda Sobhy added to her personal gold collection by partnering her younger sister Sabrina Sobhy to a straight games victory in the women’s doubles final at the Villa Deportiva Nacional Videna in the Peruvian capital.

The top-seeded Sobhy siblings successfully retained the title won four years ago in Toronto by Amanda and former world No.1 Natalie Grainger when they beat Canadian pair Samantha Cornett & Danielle Letourneau 11-10, 11-8 in 24 minutes.

The World No.8 later told her Twitter followers: “Gold medal with the sis in the women’s doubles!!! Bringing this one home to the Sobhy household!”

USA then struck gold in the Men’s Doubles when Chris Hanson & Todd Harrity recovered from a game down to overcome Canadians Shawn Delierre & Nick Sachvie 6-11, 11-5, 11-8 in 46 minutes.

The 3/4 seeded US pair made their breakthrough in the semi-finals where they despatched the second-seeded hosts’ Diego Elias & Alonso Escudero in straight games.

Colombia claimed their first squash gold medal of the 2019 Games when Catalina Pelaez & Miguel Rodriguez justified their top-seeding in the Mixed Doubles by seeing off Diana Garcia & Alfredo Avila 11-10, 11-4 in the final.

The unseeded Mexican pairing claimed their surprise place in the final with successive victories over the No.2 seeds from Argentina and US duo Olivia Blatchford Clyne & Andrew Douglas, one of the 3/4 seeds, in the semi-finals.