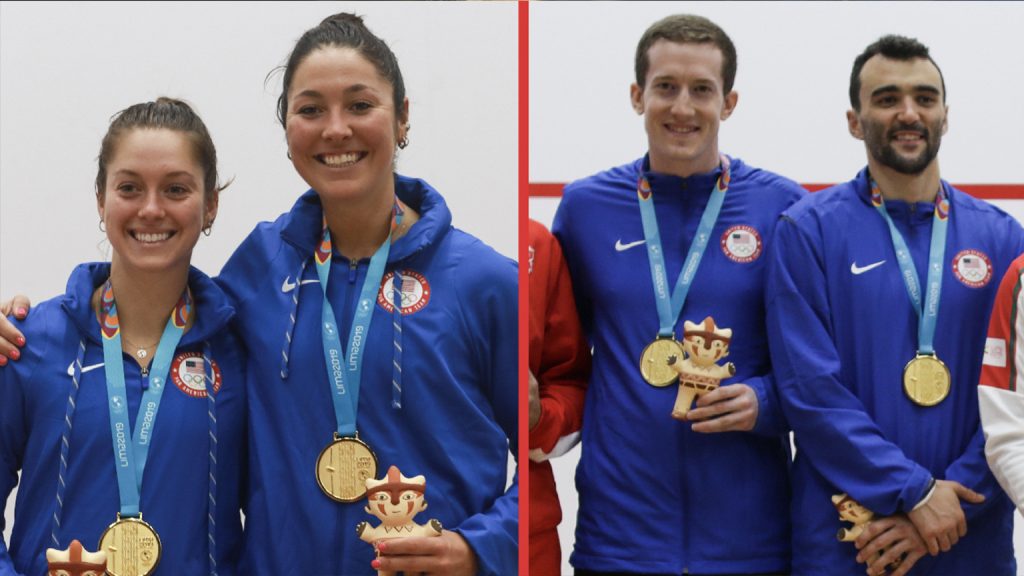 “Yesterday was historic for Team USA squash doubles,” said Paul Assaiante, the Ganek Family US Squash Head National Coach. “It brought us goosebumps to see our men and women on top of the podium over the likes of Canada, Mexico and Peru.”

After becoming the first squash player to ever win three gold medals in one year at the 2015 Toronto games, Amanda Sobhy is on track to repeat her unprecedented feat. Sobhy, world No. 8, entered the women’s draw as the top seed, opposing Blatchford Clyne, world No. 20, as the draw’s two seed. Both U.S. women put in clinical 3-0 quarterfinal performances to set up semifinals against Canada’s top-fifty-ranked 3/4 seeds Hollie Naughton and Samantha Cornett.

Sobhy and Blatchford Clyne recorded decisive 3-0 victories against Naughton and Cornett, respectively, to set up an all-American final and gurantee both gold and silver medals for Team USA. Blatchford Clyne opened up the rematch of the 2015 final by taking the first game 11-7. Sobhy responded by taking the next three games to clinch her first gold medal in Lima 7-11, 11-5, 11-7, 11-8.

Both Sobhy and Blatchford Clyne then claimed medals in the doubles competitions the following day. Blatchford Clyne teamed up with Douglas to reach the inaaugural mixed doubles semifinals, where they fell against Mexico, but added bronze medals to the U.S. cause. Amanda Sobhy teamed up with her younger sister, Sabrina, fulfilling their top seeding by clinching gold without dropping a game, including an 11-10, 11-8 final victory over Canada’s Samantha Cornett & Danielle Letourneau.

Harrity and Hanson would go on to make history for Team USA, however, putting together a surprise men’s doubles gold medal run. The 3/4-seeded Americans opened the draw with a 2-0 win over Bermuda to set up a semifinal against Peru’s two seeds Diego Elias & Alonso Escudero, who Harrity & Hanson would defeat 11-8, 11-8.

“Amanda and Sabrina had to comeback from 6-1 in the first game of the final and the second game was tight point by point, but they were able to pull out another doubles gold for the U.S,” Assaiante said. “The men were another story, do you believe in miracles? Canada jumped all over Todd and Chris in the first game. There simply didn’t seem to be any holes in their armor, but Todd and Chris picked up the pace an effectively took away their shot-making.”

The U.S. men and women now turn their focus to the team competition, which concludes the squash portion of the games, July 29-31. Follow team results here. Follow @TeamUSASquash on Twitter and @USSquash on instagram for more updates and coverage from Lima.

Originally Posted on: US Squash